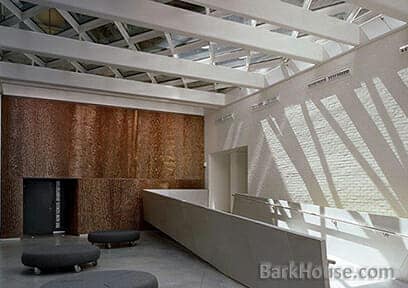 “It’s really exciting to be part of something that’s making a huge presence and creating architectural change,” says Chris, who grew up near Spruce Pine and, with a family tree she can trace back eight generations, has deep roots in the surrounding community.

Just as important, they worked with local landowners who harvested their trees as a way to keep their properties within their families, especially when other industries, such as tobacco, had fled their area.

By harkening back to the past, the McCurrys essentially created a new market for something that used to be considered waste: the bark from the tree. “We call it RAW, or reclaimed Appalachian wood waste,” says Chris, who, in addition to writing a book called Bark House Style, has been lauded by her community for her efforts to preserve the history and culture of the mountains she calls home. “We’ve been able to provide landowners and loggers with a revenue stream they didn’t have before.”

In fact, Chris has increasingly become a prominent voice in the field of sustainability, where in addition to promoting the environmental impact of her business, she also believes strongly that every business should also strive to be financially sustainable as a way to help give back to its community—all of which helped Highland Craftsmen earn the coveted distinction of becoming a certified B Corporation.  As Chris says, “We want to be an example of what it means to be both beautiful outside and within.”