More than 114 million American football fans watched the Super Bowl this year.  Winning teams and team owners know the importance of fans during game day.  So what do fans care about?  After home team wins and between touchdowns and beer runs, they want ease of movement, good seats and a loud stadium.  But offer a fan an opportunity for behind the scenes extras like a VIP box or lounge and watch them light up.  That’s just where we are going!  Our story begins and ends at the homes of the two rival teams from Super Bowl 50 – Carolina and Denver.

Some of the Bark House team weathered the surprise ice storm and stood screaming for four solid hours at the Carolina Panthers NFC Championship game in Charlotte.  The final plays of the AFC Championship were broadcast on the big screen preceding the opening ceremonies.  Our group was split on who we wanted the Panther’s to face in the super bowl.  With the Broncos win, we quickly refocused to the game at hand.  It was a great night for Panther’s fans!  After a 49-15 win, there were lots of highlights to talk about, so I was surprised that all of us commented on the same thing leaving the stadium.  Maybe it’s because we’re part nerds, but each of us wondered about the engineering tolerances when the Bank of America Stadium shook while we bounced in unison to the blaring music.

The architectural evolution of the colosseum began in Rome.  50,000 fans could be seated in 5 minutes and evacuated in 15.  Seating was strictly according to social class.  The closer to the central arena, the higher your rank in society. The emperor and vestal virgins occupied boxes at the central narrowest points of the stadium, for best viewing.  After the senators, noblemen, knights and wealthy citizens the remaining seats were occupied by the poorer citizens.  Seem familiar?  Sitting at the Roman ruins of Aspendos in Antalya Turkey just a few years ago, I was in awe of the human capacity to understand the dynamics of sound, then design a structure that amplifies it in one direction so that performers on a stage are audible to the masses but the actors cannot hear the audience’s comments.  A thing of the past?  The Seahawks stadium broke the record for loudness using acoustic booming aluminum to reverberate sound and the Atlanta Falcons pumped in crowd noise.

Today’s coliseums glean inspiration for design from the past and have a vision for the future.  They mimic birds’ nests, living cells, waves in water, starlit skies, craters, cut crystal and the list goes on.  Stadium skins proudly reflect regional significance with the use of local materials or technological prowess conveyed through high tech fabrics.  Coliseum design and construction is a big money game.

That’s where our connection to the Bronco’s Stadium plays out.  One huge wall of the 30,000 sq ft VIP Club at Mile High Stadium has donned our richly textured bark wall coverings since 2006. Andre Kikoski, AIA, designer of the space, called the Denver bark installation “right on the money”.  He shared that “… when the bark was installed in Denver, everyone had to touch it.  We were all smiles. It’s an intellectually compelling product as well as a really physically beautiful product. And it performs well. It’s a sheer joy. And we’ve all been wanting more.”  According the Bronco’s website, the club “…is the ultimate way for fans to experience Broncos football and enjoy exclusive club member benefits.” I had the privilege to get a private tour of the exclusive VIP lounge and the stadium on one of my trips to Colorado.  With no one there, the stadium felt enormous.  The project was a definite score, as was the tour! 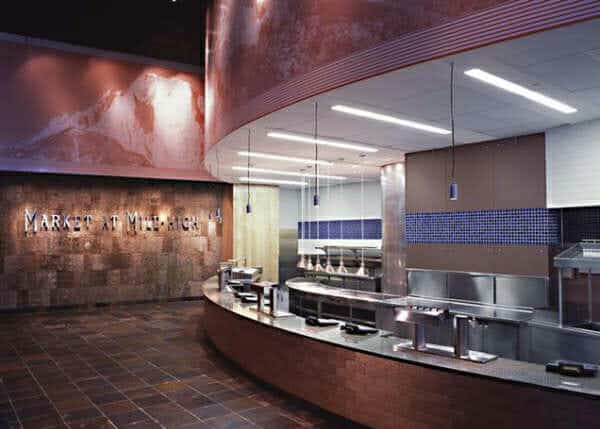 I hope enough time has passed since the super bowl that disappointed, exuberant or indifferent football fans can approach the subject of this past year’s season with relaxed offense.  Until next season and another opportunity for super bowl glory…  We all miss football so…darn…much.