The sixth season of Brother vs. Brother pits Jonathan and Drew Scott against each other as they put their home renovation and real estate skills to the test. From demolition to sale, the guys buy two fixer uppers and renovate every room with their own money and sponsor support.  Each week, Jonathan and Drew will progress through each room in a series of home improvement challenges.  One of the brothers chose to integrate Bark House poplar wall coverings as a feature in one of the rooms.  Which brother chose to work with Bark House?  Will that room win the competition for him?  Things are certain to heat up in this season.  All for a good cause, the donations raised go to Rebuilding Together, a national organization that transforms the lives of low-income homeowners by providing critical home repairs to improve the safety and health of their homes and revitalizing the communities in which they live.

Meanwhile, Ryan Crawley of The Bark House visited with Johnathon in anticipation of the airing.  Ryan may have gotten a few hints about things to come, but we aren’t sharing.  The show, Brother vs Brother premiered May 23 on HGTV for six consecutive weeks.  Watch along with us to see what happens.  Next week promises a great reveal. 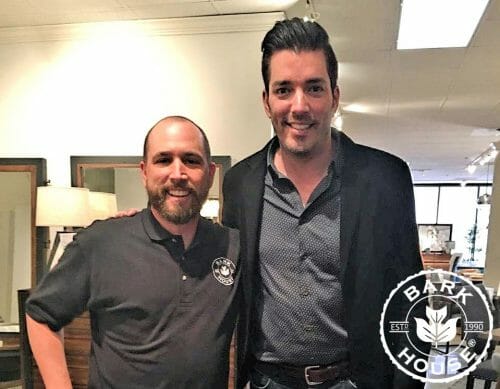