A couple years back, our company was privileged to have the opportunity to provide Black Locust Split Rail Fencing to the National Park Service for the Yorktown Battlefield. Everyone here understood the importance and significance of this destination. It was a very large order that took us all winter to produce. I particularly remember a number of blustery snowy days that made the log splitting challenging to our guys who were already doing a tough job. The logs are hand rolled with a peavey into position, and then lifted onto the splitter with a hydraulic lifter. As the log rolls over into place, it has to be manhandled into the optimum split line. No easy task as the logs range in weight from 300 to 1200 pounds. This process is repeated over and over until the entire log has been split down to a single remaining rail.  Cold days make cold fingers that don’t feel good getting constantly mashed. Nonetheless, the guys trudged on, tolerating my occasional interruptions of historical anecdotes in an attempt to boost morale. The rails were piled to the side for the axe guy who makes a dozen or so chops to trim the splinters. He never stopped to listen. Never got cold though, either.

Black Locust, a beloved Bark House favorite, has been admired since the earliest North American colonization for its strength and durability. While used by Native Americans prior to European settlement, the English colonists proliferated its usage for structure both domestically and abroad. Early builders favored the strength and rot resistance of locust for beams, posts, and sills. These traits make it a given that it was also great for fencing.  Split rails were a standard for enclosing fields and containing livestock for two hundred years as barbed wire was not used until after the Civil War. Even after modern wire fencing took hold, split rails were still used and have even flourished in recent decades as the desire for tradition persists.

Black Locust is generally regarded today as a weed species for its propensity for cleared ground reclamation. It spreads quickly from seeds and root suckering, and is used a lot to seed mining disturbances. Bacteria found in the root system fixes nitrogen that is released into the soil and thus fertilizes the ground for further plant growth. However, the trees are plagued by invaders such as locust borers, miner beetles and heart rot fungi, so it is not viable as a marketable timber species. However, we harvest black locust before it succumbs to these pests, and, after splitting and drying, insects lose interest. The trees are also vulnerable to dense shade, so even though they grow rapidly, they can be swallowed up and eventually choked out of sunlight by larger and more dominant trees. We readily reclaim these “standing-dead trunks,” if untouched by disease, as they are generally already seasoned and thus tend to split easier. We compete hard against firewood cutters for the logs. People love to heat with locust for it has one of the highest BTU yields of any hardwood species. 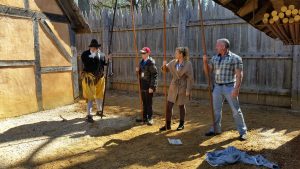 Anyway, back to Yorktown. This past spring I noticed my son had become enthralled with a cable documentary series on the American Revolution. He has entered those developmental years where he has become a sponge for historical facts and details. My sister was busy completing her application for the Daughters of the Revolution and was further piquing his interest with stories of our patriot ancestors. So, my wife and I decided to take advantage of this focus by celebrating his birthday with a trip to an area where we celebrate the birth of our country. Colonial Williamsburg, Jamestown Settlement, and the Yorktown Battlefield. Perfect time to see our split rails. We had visited the Historical Triangle early in our marriage, but I don’t think I appreciated it as much as seeing it again through the eyes of my child. We were “all in” at every site as we signed up for every activity offered.  Nothing like the smell of black powder in the morning. All of the actors and volunteers at all the sites  are so impassioned with their work. You are truly swept back into a  time of thirst for rights and freedom amongst the fearless breed that earned it.

We had driven the visually stunning Colonial Parkway back and forth between the historic sites, all the while glancing and chatting about the groupings of our fencing that you see in spots. It’s when we pulled up to Surrender Field, though, that we all got kind of quiet. We stepped out of our vehicle and walked over to the path so reverently outlined with the split rails from our crew. It was here on October 19th, 1781 where the British forces marched out of Yorktown to lay down their arms. Nearly 8,000 troops solemnly marched between the combined American and French armies. According to tradition, the British band played “The World Turned Upside Down” as they paraded through. General O’Hara substituting for the humiliated and absent General Cornwallis, offered the formal surrender first to the French, then to General Washington who thus directed him to surrender to his subordinate. This marked the end of major armed conflict and the beginning of formal independence that would come two years later.

The significance of this field sunk in. Your chest rises… you get a lump in your throat.  It’s a powerful place. It marked our county’s grand entrance into the world.

You can experience all of this for yourself. Go get reminded of the courage and grit it took to forge this country. Go truly understand what it is to be an American. Go rediscover who you are.  Visit Colonial Williamsburg for more information.