I was recently watching our guys craft a Yellow Birch Wall Covering panel when a warm memory flickered in my mind. For some reason, I could smell my grandfather’s cook stove. The purest and best of my early inquiries were nurtured in that farmhouse and the woods that surrounded it.

“Paw Watts” was born in 1885. He was a living legend from another era to me.  Cooked over an open fire in a log cabin until he was in his mid 30’s when city watershed imminent domain forced him down off the mountain into the “flats.” My favorite line from my beloved maternal grandfather when discussing life in the cabin was “Aah, we didn’t have nuthing back then…didn’t have anything to git it with. Couldn’tve got it if they had it…there wudn’t nuthing to git.” I think he was expressing to me that he was resigned to the fact that his life had been a simple one and he was comfortable with the fact that the rest of it would be as well. 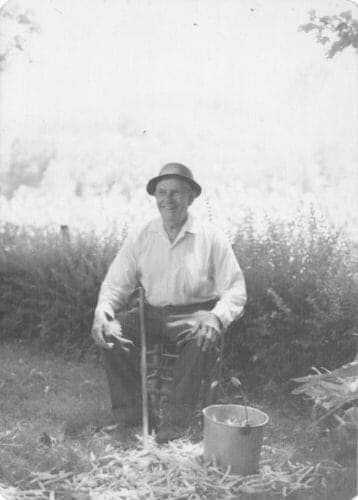 “Aah, we didn’t have nuthing back then…didn’t have anything to git it with. Couldn’tve got it if they had it…there wudn’t nuthing to git.”

I cherish those barefoot days under a mammoth white oak in the back yard, where he kept an old handmade  hickory ladder-back chair that he sat in for stringing beans . He often took breaks from chores in the old chair, leaning forward with hands clutched against his sourwood cane. He selected and whittled that cane some years back because it “had the right crook” to it. He had carved out a small chunk of rubber from a worn out tire and tacked it on the bottom of his walkin’ stick as to keep it from wearing out too soon. So it was there, under the shade of the massive oak canopy, that he offered hours of stories and anecdotes about a near vanished existence of simplicity and purity. “Law child, they were tough times but good times.” He’d break up the serious reflections by knocking an old rusted JFG coffee can with his cane towards his gray-chinned Feist named “Blackie”.  I think Blackie was older than Paw in dog years, but he nonetheless obliged us with a youthful display of rootin’ the can up on his nose and tossin’ it over his head.

Occasionally, I could coax Paw into making one of the items from his stories that so captivated me as a young lad. We made a box trap for catching bobwhite quail by tacking together a pyramid of old wood tomato stakes. Another day, I roamed the creek bottom to scavenge elderberry shafts, hard maple twigs, and sourwood limbs to fashion a “pop gun/squirt gun” combo he made as a boy. He had me cut a white oak sapling once, and then showed me how to strip the sapwood to make “splits” for re-bottoming  that old ladder-back chair seat. It was focused, diligent, and deliberate work, only occasionally interrupted to crank the windlass up for a cold bucket of well water to help wash down pungent fresh-pulled turnips that we like to gnaw on.

As you can see, every smell, every texture, every form and function was all part of a complex system where self-sufficient folks could pluck out the right piece of nature to do just the right thing needing to be done. That kind of people who are self-sufficient needed what they took but only took what they needed.  Things were not wasted, another purpose was found.

My thoughts wandered forward as I continued to watch the team craft our birch bark wall coverings. Always loved the luminescent glow of yellow birch. Even in dense forest canopies, it only takes a sliver of light hitting its trunk for the shiny bark and shaggy papery strips to glow. I was on a forest stroll with an old saw 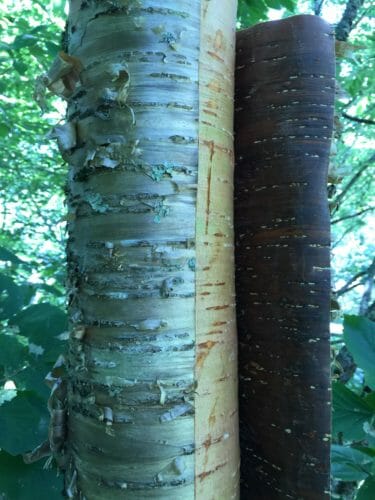 miller back in the 90’s when we ambled up on a grove of these trees. “Use yellow birch for anything?” I asked. “Makes perty lumber. Make toothpicks out of it up north,” he replied.  I made my way up to rub a particularly glossy trunk and remarked how stunning beautiful I thought it was. He paused for a moment as if something clicked and then rambled off an inappropriate story about “white likker” and someone else’s wife. I cast him an annoyed glance and tuned out his musings. I then pulled out a pocket knife and decided to try and peel that tree. Wasn’t easy, and I only managed a small un-torn sliver, but I pocketed it anyway for later study. If only I could share that incredible texture. The bark’s going to waste when the logs get cut, but It’s going to be tough to harvest. Don’t know how to flatten it, dry it, weave it, glue it. It will be amazing, though.

Reverence, diligence, and elegance. Our philosophy here. Hours were spent in the shop. Within the year, we had added it to our Bark Wall Covering  Collection.

I smiled as they wrapped up the panel.  Forty years had compressed to remind me who I am. 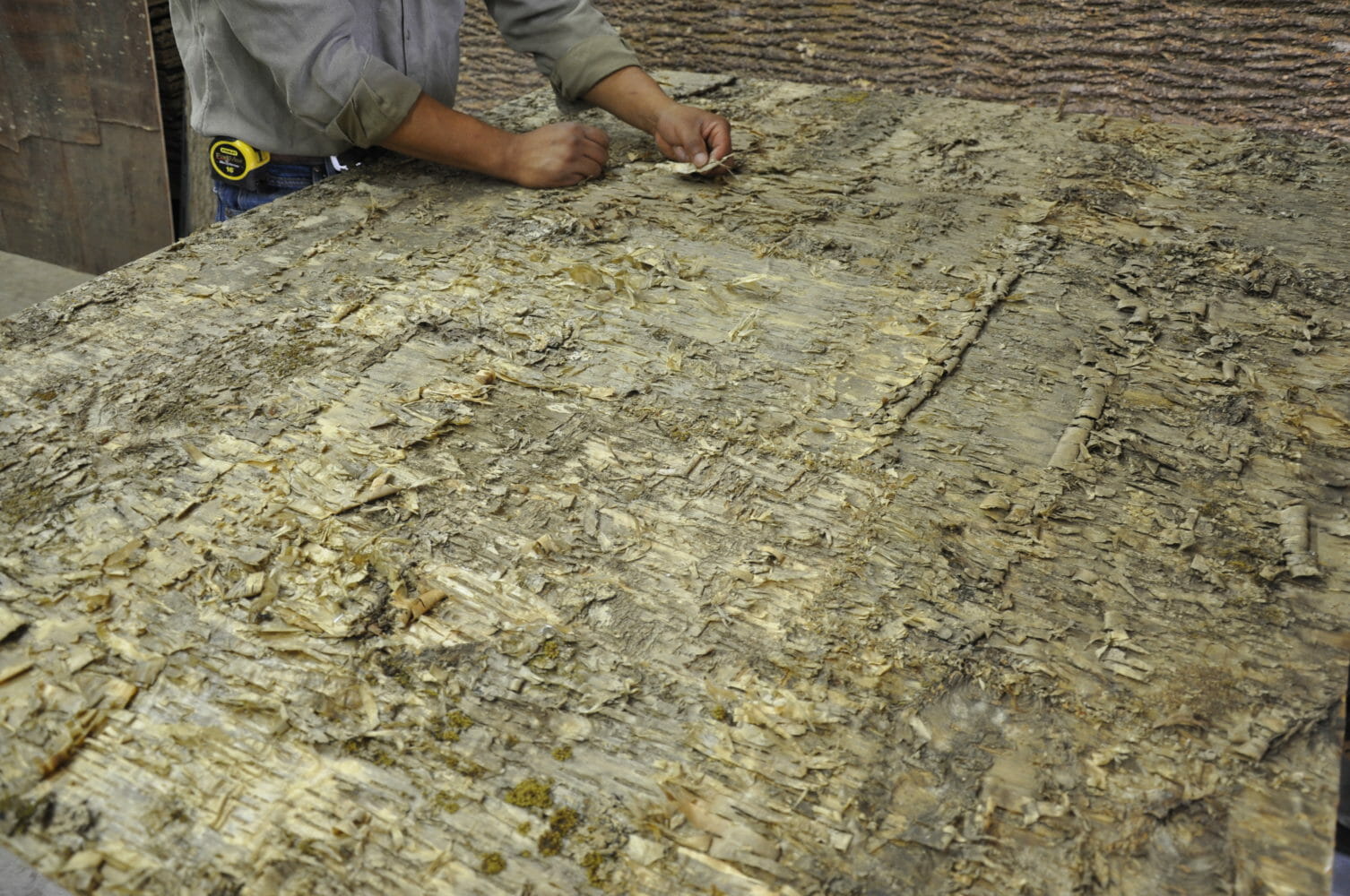