At the end of this year – our 25th Anniversary – we are celebrating the legacy of a great Architect who inspired us to create today’s poplar bark shingle.  There are no recordings of the exact events that led up to the creation of the first squared Chestnut bark shingle.  Bark House Style, Sustainable Designs From Nature published in 2008, integrates facts to create a working theory.  In addition to sharing that theory, this writer will take one more step toward explaining the integrative style that locals lovingly refer to as Old-Linville – a truly NC style.

In the late 1800’s Hugh MacRae, a businessman and real estate developer put together an impressive 16,000 acre tract in the mountains of NC that included Grandfather Mountain.  Part of this tract became Linville Resort, which was designed in appreciation of the natural surroundings as a playground for the wealthy.  MacRae secured a family friend and Architect, Henry Bacon – long acclaimed for “finding the perfect solution to any problem” to set the style for this new development.  Bacon designed the local church and five residences, inspiring the bark shingle style that is reflected today.

Many have struggled through time to identify an historical context that accurately expresses NC mountain architecture.  Many will not agree with this assessment.  They should not as it is a prevalent part of our culture to disagree.  Two constructs that are undeniable is that the dominant consideration for the local mass population is that form followed function and readily available materials were preferable in this challenging terrain.  Focusing on the style that Bacon set for Linville, these constructs were not overlooked.

The shingle style was gaining in popularity in the US and Bacon’s New York Architectural firm, McKim, Mead and White, were largely responsible for its foothold in the United States.  Bark was a readily available material at sawmills waiting to be shipped to tanning factories down-state.  A frugal Scott (MacRae) and a consciences Architect (Bacon) likely seized the opportunity and refined the bottom edge of the bark with a hand saw to create our revered squared bark shingle. 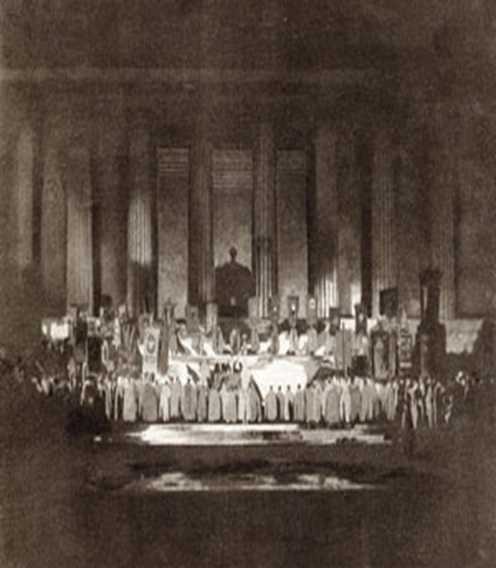 Although not all elements from the Beaux-Arts are represented in Bacon’s Linville designs, many such as “…a hierarchy of spaces [the grand porches], …synthesis of historicist styles, …and a tendency to eclecticism, …symmetry,…[and] subtle polychromy…” (as related to the natural variation in the bark of a tree) are evident.  “Rustication” was accomplished with the use of chestnut bark (as opposed to the stone) are presented as the perfect organic 3-D mottling.  The roofs are obviously not flat as this would not be functional for local snow loads.  The transverse log capitals setting atop the massive columns that flank the front entry of many of Bacon’s Linville homes is similar in design of the Lincoln Memorial (of the Beaux-Arts style).

Thus, a classically trained architect who admired symmetry and simplicity created a style that was entirely his own, cut from the bark of trees.  Bacon was one of the best-known architects of his era, but little historical mention of this contribution is cited.  The conversation remains relevant today as The Bark House® continues to proliferate a refined presentation and celebration of a beautiful nature.