Back in January, my brother Eric called and wanted a backpacking trip arranged for the Linville Gorge Wilderness Area for late February. He and I used to through hike that place a lot but it had been 25 years since our last trip. Ryan and Matt here at the office got wind of it and well, then it was on. Took a week to dig my antique camping gear out of storage. Figured my son needed a humbling outdoor experience, and I needed to show my Bark House posse that I wasn’t aged out yet. So , I towed along a couple of in-laws to boot and off the seven of us went to seek immortality. We decided on a 3 day romp that covered about 5 miles a day. This afforded us a couple of afternoons of lounging around the camp which was honestly welcome given the technical difficulty of the hike. Trails are not well marked and are laced with roots and jagged rock.  Such is the nature of wilderness area as they are intended to be left as undisturbed from human manipulation as possible. 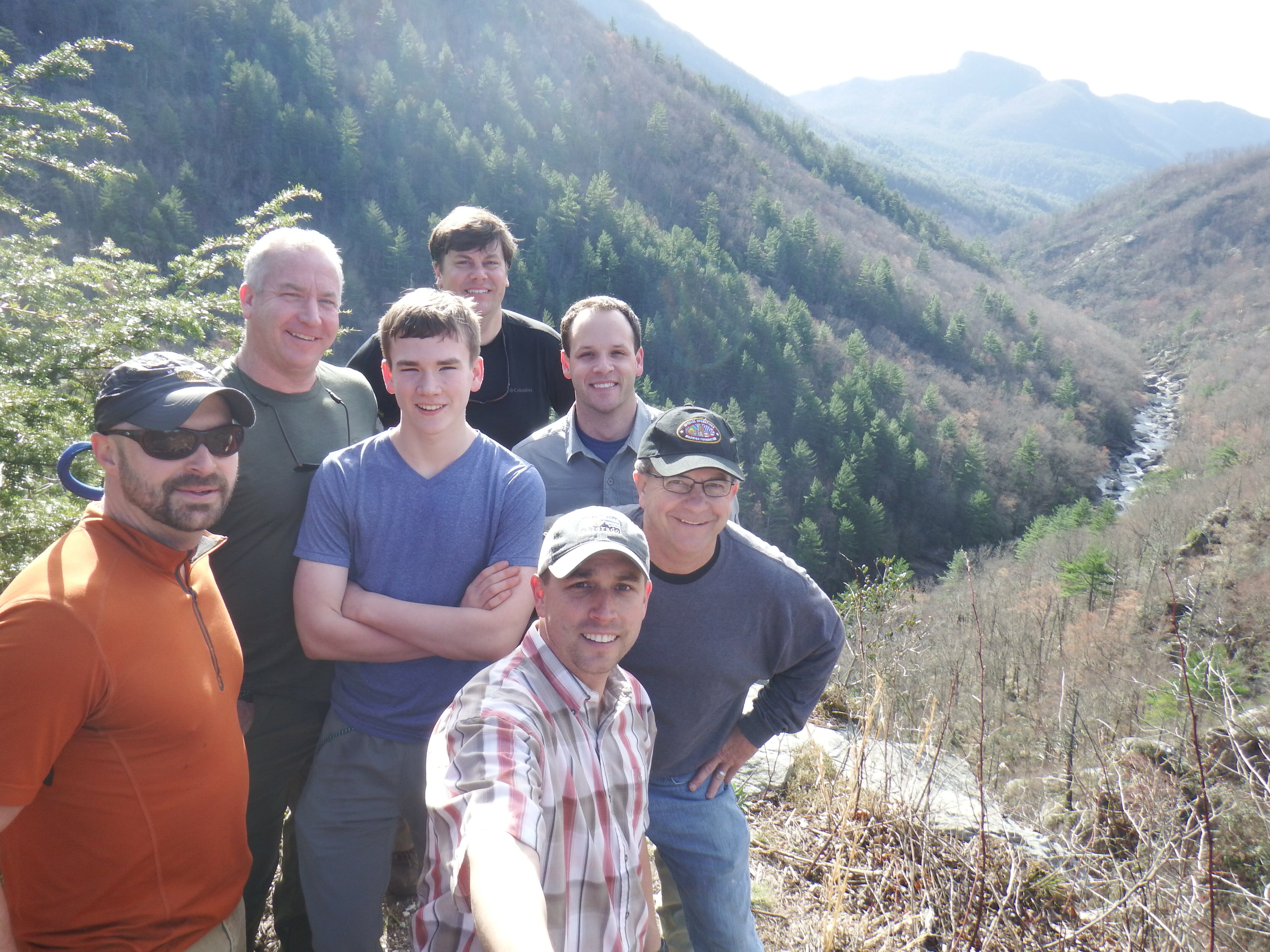 The Linville Gorge is legendary here locally. It’s 1400′ deep  and about 20 miles long and has never seen commercial logging or development. The local rescue squad practically keeps a full time team in there hauling out lost or injured hikers and climbers and, unfortunately, there have been fatalities over the years. The Cherokee called the river that runs through it the “river of many cliffs”. This “Grand Canyon of the East” is so raw and awe-inspiring that it was used in the end scene of Michael Mann’s “Last of the Mohicans.” The Gorge was first protected by funds donated from John D. Rockefeller. When the Wilderness Act of 1964 was signed into law, it became one of the first formally designated tracts of the new National Wilderness Preservation System. 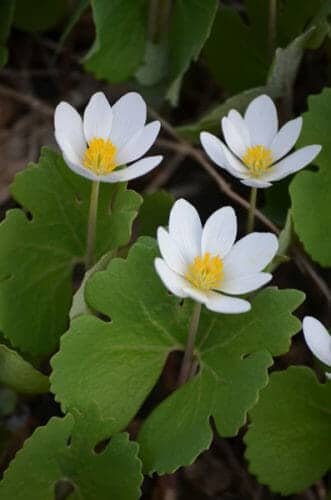 On our second day, we were humping along admiring the fresh early spring bloom of bloodroot (sanguinaria canadensis) along the trail when we spotted a group of guys close to our next campsite. They had no gear, which seemed odd, but were carrying large trash bags and rolling tires down the trail. Turned out that one was an old high school buddy of Eric’s.  “Watch you guys doing with those tires?” we had to inquire. Well, they hike down on the weekends, pick up garbage that washes down through from way upstream of the Wilderness area, and then carry it 1400′ vertical back out. Called themselves the “Gorge Rats”. Not paid, not asked… they just do it. It’s tough enough to haul your own ass up that hill, but carrying out tires?

A Wilderness is considered a natural environment that has not been significantly changed by civilized human activity. I know, I know…climate change, Native Americans, early European exploration, senseless garbage washing down from upstream, that the minute we hike through it …all affects its purity. But I didn’t contemplate that while I was down in there, that’s for others to debate. All I thought about was what a privilege to experience what still felt plenty wild to me. I thought about how thankful I was to all those people before me who recognized this needed to be set aside and preserved. 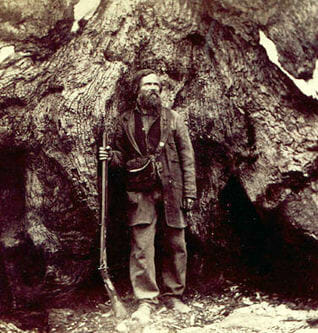 During the week after the trip, Ryan Crawley put together a video of our walk and our group chatted back and forth and worked diligently at stretching the truth about our trials in the wilderness. The “Gorge Rats” never left our thoughts, though. A month later, my family took a National Park tour out west during the 100th year Park Service Celebration. While in Yosemite, I became fascinated with the first guardian of that park , a mountain man named Galen Clark. Heroic looking figure in an old photo standing at the base of a giant sequoia. My brother called me when we returned and told me to look at a Facebook page on Linville Gorge Wilderness. I scrolled back through photos posted and found our modern day wilderness heroes. There were the “Gorge Rats” carrying out more tires. 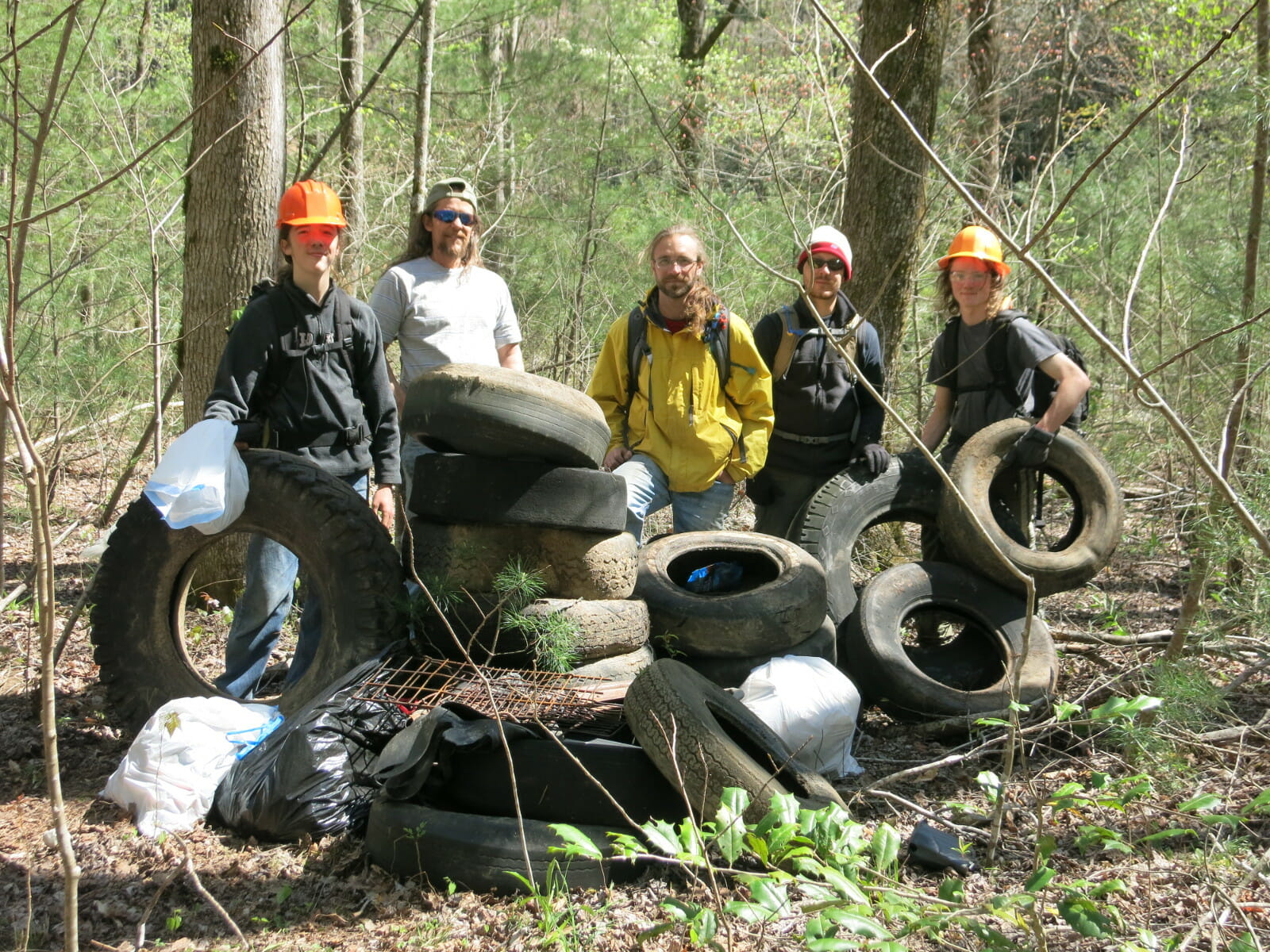 One response to “Wilderness Heroes”