A panel of six judges, representing the nation’s leading architectural firms, selected the best new products of the year from among 425 entries submitted for Architectural Record‘s 11th annual competition.  Entries were judged on the criteria of innovation, aesthetics and purposefulness.  The company has now received three prestigious awards this year including a tenth B Corp “Best for the World” award and has the first product with a Cradle to Cradle® PLATINUM Certification (2016). 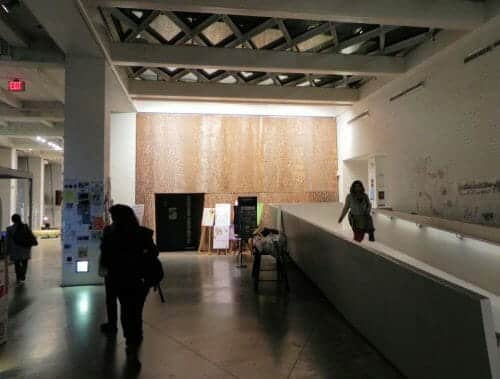 “Lyn Rice Architects unites a New York City campus with a new urban quad at Parsons’s Sheila C. Johnson Design Center” headlined in the 09/08 issue of Architectural Record magazine.  The team was taxed to connect unrelated buildings that did not align, one to the other. “The idea of reconnecting to the city drove the project,” said Rice.

This is what Lyn Rice, AIA the founding principal of Rice+Lipka Architects has to say about the project today:  “At Parsons School of Design, we created a new multi-building campus center in a dense urban area of New York City.  The Bark House worked closely with us to find the precise material characteristics we were seeking for the project – a warm, large scale material, natural with strong texture and durability.  Bark was new to us as an interior institutional finish and there were some initial concerns about the durability of bark as an interior finish, but we came to understand that bark has a lifetime of outdoor exposure and has been battered by the elements.  We used large, monolithic bark panels to bring a warm, unexpected element to the space, and to acknowledge the existing, but hidden, wood structure of the building onto which it is installed.  The Bark House helped us understand the sustainable harvesting process, provided multiple samples and mock-ups and were kind, responsive and professional.  Now, after years of public exposure at Parsons, the bark looks as good as the day it was installed.  In combination with a large glazed roof, this bit of transplanted Bark House nature enlivens the shared space and reconnects this interior campus hub to the outdoors.” 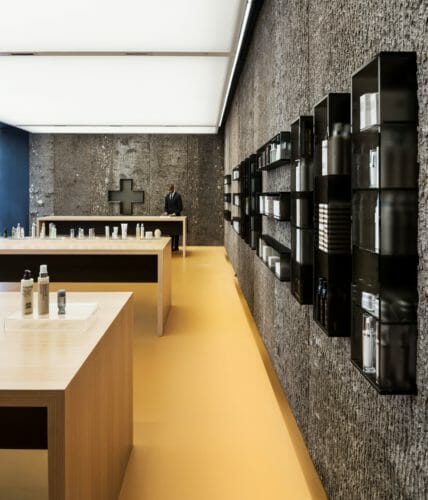 “Surface Tension:  A Progression of Materials… from rough poplar bark to smooth bronze panels” headlined in the 09/15 issue, a project designed by David Jameson Architect for SHERBER + RAD.  “Inspired by the structure of a tree—with its rough bark  on the outside and smoother rings closer to the core— the Washington, D.C.–based architect organized the 3,770-square-foot facility as a progression of spaces wrapped in increasingly refined materials….Jameson lined the walls here with the thick bark of 40 poplar trees, unrolled vertically to create the impression of a flattened forest. Some of the bark still has lichen attached or knots where branches had been. Variations in color, texture, and width show that nature is not uniform and enhance the visual appeal of the space.”

The two projects made powerful statements but seem at first to have very different goals.  One to organize disconnected spaces – to relieve tension and the other to express tension.  Presenting connection between seemingly different parts is one of the beauties of Bark House products.  “We imagine buildings akin to a stand of trees with many species and cities as urban forests reaching toward regeneration.  As such – we are proud that the urban designs called upon bark wall coverings to help create a perfect natural fit.” – Chris McCurry

Lyn Rice is founding principal of Rice+Lipka Architects and has developed an iterative design approach that inventively embraces practical constraints and actively teases out of them unexpected design opportunities.  Rice was selected as one of the Architectural League of New York’s Emerging Voices and named part of the Design Vanguard by Architectural Record.  His work has been published widely and recognized with a dozen American Institute of Architects Design Awards among others.  Rice currently serves on the Board of Directors of the Architectural League of New York.  He holds a Master’s from Columbia University, where he currently serves as roving critic, and has led design studios at Princeton, Barnard College, Syracuse/NYC, and The Cooper Union.

David Jameson, FAIA, founded his architectural studio in 2001 upon a rigorous commitment to design excellence. The studio’s work has been recognized nationally and internationally with over 175 design awards and featured in over 200 design. London based Wallpaper magazine recognized the firm in 2011 as one of four US based firms to follow in its Fabulous 40 issue and Architectural Digest named David as the youngest member of their AD100 roster, a listing of the top 100 architects and designer’s worldwide. In 2012 the Wall Street Journal included the studio in their folio of the ten best residential architects in the US.

← Trust Your Own Wings to Fly
Treehouse Masters Appalachian Christmas →