At dawn I headed out to feed the animals.  On cold January mornings its particularly important for the horses because eating the hay warms them.  In the dim light, I was having an internal dialog about the efficiency of movement in space.  I have been planning a remodel and eventual addition to the old farm house.  The process has filled my free time and encroached on work.  It will be the first time Marty and I will impart ourselves onto the house with structural changes.  I was contemplating how essential it is that the inside world is tied to the outside environment to reflect the soul of a farmhouse.  Each element embodied, including non-physical aspects such as movement in space – develop that relationship.

As I heaved the gate open away from the morning freeze, I thought about improving the efficiency of getting a heavy bale of hay hoisted above my head and into the feeder.  The result of this act is that the elevated feeder prevents ground contact and spoiling of the hay, which justified the extra daily effort.  How might I perform this action with more ease?  What could I build to make my chore less stressful?  How could I minimize my impact while adding a secondary structure, so that it would blend with the entire place?  The work of designing and building will place an additional load on my and Marty’s already busy schedules.  But more pressing than time to us, is the pervasive pull to understand and honor place.  The relationship of a building to its place and that place to the larger world seems more important than ever right now.  Can these simple acts contribute to the grounding we seem to need in this time?

I recalled the movements I witnessed in the forest watching our beloved vendor, Kevin, fall a tree.  Like a dance with no movement wasted and no thought given, he instinctively grabbed for his tape to measure his next cut before the tree landed. He was familiar with the ground he stood on, the impact he had created and the process that would move his goal further.  The fluidity of his movement and the impact of his action was pure art.  I then recalled my grandfather insisting that I grab the tool he had just finished with making a repair at the house and place it inside the door of the white toolshed before I skipped alongside the creek on my next adventure as a child.  This was so he would not have to waste a trip.  I knew that the next time he was in the building, he would further refine my placement of accumulated tools in their proper locations.  The desire to emulate such pure precision and thrift of movement in space pulsed in my heart.

At that moment with the heavy bale of hay in hands and lost in thought, I stumbled over the frozen ground that had pushed upward in the night’s thaw and freeze cycle.  The subtle change in the landscape was nearly enough to send me head first over the top of the hay.  After re-centering, I found myself in a changed environment not of my design, but none the less of my pleasure.  My graceless thud brought my attention back to the pasture.  There was more light now and the horses had joined me for their morning feeding.  The snow was light upon the ground and the bare trees allowed sight beyond the horizon where I often observe the routines of the deer and turkey.  It was not within my movement that I found grace, but in the gift of this place on this morning.

How will I properly honor that with the changes I seek to make building our family bark farm house? 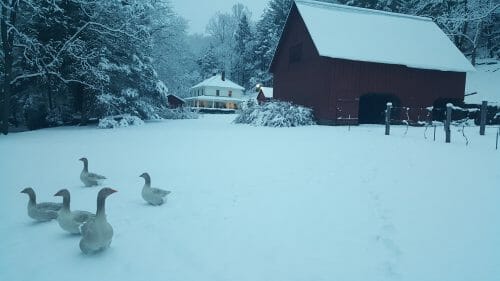