For years, Ryan and I have tried to explain to folks how incredibly difficult it is to harvest our Poplar Bark Panels. I have always said “one in a thousand trees” to push the point. Last year we decided to follow one of our favorite logging crews into the forest to try to film the procurement of this nearly unobtainable product. They had just procured a hard-fought selection of panels that met a critical timeline for a client in Miami. Kevin, his brother Eddie, and longtime friend Keith have logged together for years. They were the right crew on the right timber boundary for us to record a panel being harvested. Timing is everything in our world. Getting a slot with busy pro photographer, cooperative weather, big straight trees, moon in the right phase…the list goes on.

So, we show up on the logging site to film and I immediately ask Kevin if we can go for a panel. “Naw, the trees are too small that we can get to today.” He pointed to the far end of the grove to indicate a patch of 24” plus trees. “We’ll be in that patch at the end of this job and might peel a couple then.” Got some nice still shots of bark peeling and called it a day. Well, the job ended a month or so later with no more panels coming from it. “Ever dern one we tried, cracked.”  Got another timber boundary we can try to film? Season’s coming to an end. “Naw, gotta move to a Pine patch.” Great, I guess we’ll try to capture something next year.

So, nearly a year to date, we pulled the film crew back into woods to follow Kevin and his crew on a new boundary in Madison County, NC. “Son, it’s covered up in big poplars!” brother Eddie assured me. “I mean, they’re huge!” 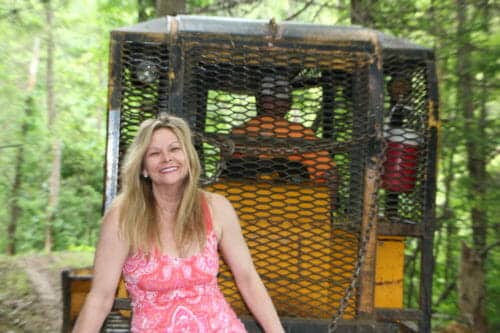 It had been a wet start to the season, so Kevin warned that getting up the mountain to the site was going to be a challenge. Our transportation for our crew and gear was waiting in a field at the base of a very steep logging road. It consisted of a John Deere dozer pulling a ‘49 Chevy truck bed that Kevin had converted into a trailer. We piled the cameras and gear into the back and Scott (our Photographer), Chris and I crawled in. Ryan climbed up into the dozer cab with Eddie to get video while Kevin and Keith crew rode on a 4-wheeler. Eddie throttled up the diesel and with a violent lurch and a loud clanking of tracks, we began to climb the hill. I tolerated a handful of sharp jolts as the dozer pulled trailer bounced and pounded over rocks before leaping over the side. Saving a few calories wasn’t worth the pending orthopedic bill. I took a quick jog to get in front of the convoy as to attempt to savor a few moments of the meadow’s tranquility before that smoke belching diesel interrupted the calm. The heavy morning mist held the fleeting scents of the wildflowers close to the ground. I reached through the weeds to pull in a stalk of Bee Balm (Monarda didyma L.) when my boot made an audible crunch. I stepped back to notice I had flattened a couple of wild turkey eggs. A closer look revealed that the entire nest of a dozen or so pale splotchy eggs had been raided and sucked dry by a predator prior to my misstep. “Place is covered up with coyotes” Keith remarked as he and Kevin rode up.

I moved on and pushed hard up the slick and muddy hill to stay in front for the self- defeating purpose of keeping everyone from seeing me gasping for breath for staying out in front. By the time we reached the section they were cutting, I was about done for the day already. As I sucked down a bottle of water and my vision cleared, I began to realize the incredible grove of poplar we were in. It was a healthy stand of a mix of large trees and small. Selective cutting of only mature trees insures a constant canopy and a sustainable harvest for the next generation. 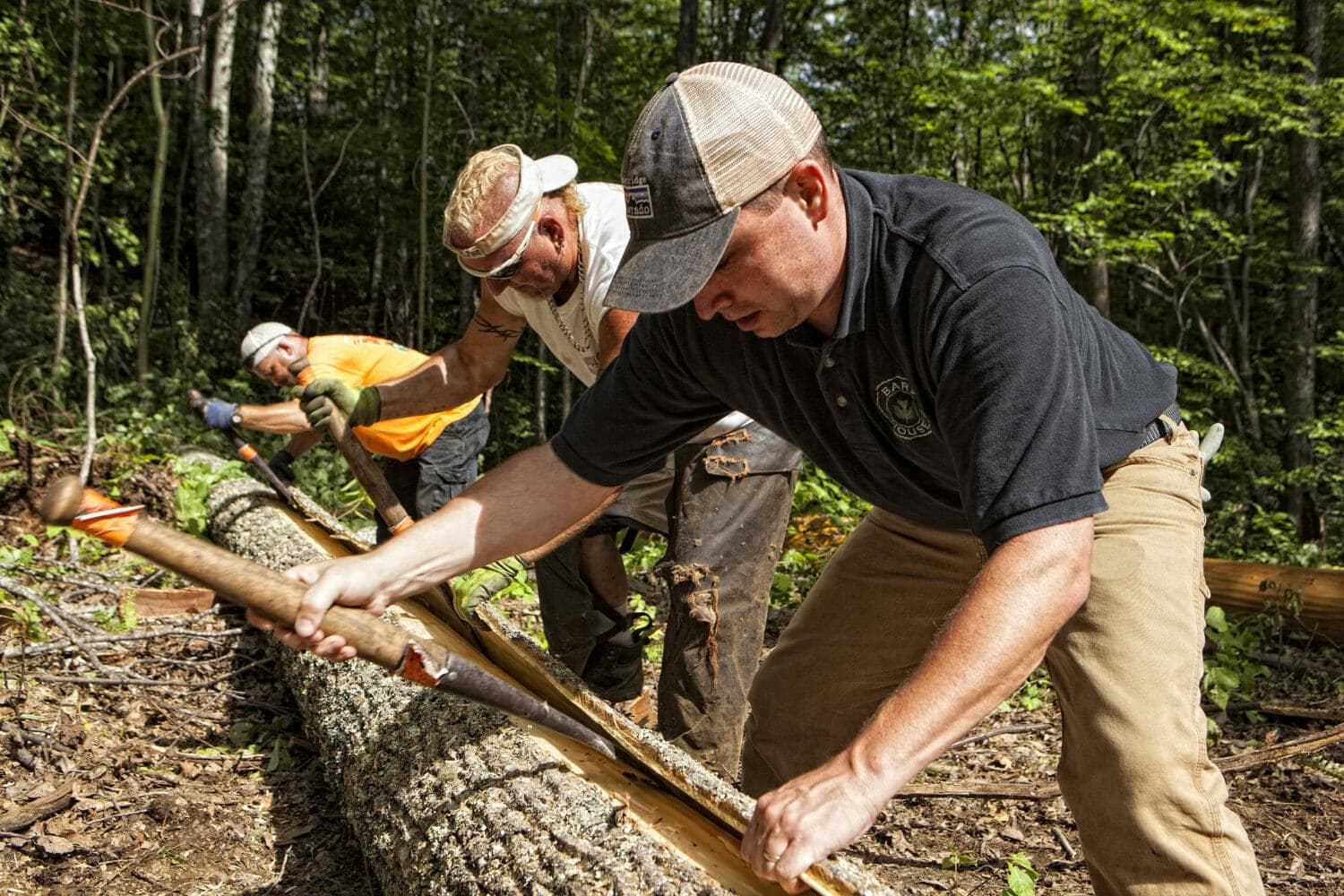 Kevin pulled in, grabbed a 460 Stihl chainsaw out of the trailer and slowly studied the surrounding canopy. As he moved toward the first tree of the day, Eddie and Keith politely moved us into a safe position to observe. After the tree falls, Kevin pulls a logger’s tape down the trunk to mark it where it will be cut to length or “bucked” once the tree is pulled back down the mountain for loading. He “rings” the trunk here only deep enough to score the bark. Next, he hops up on the log with the Stihl idling, walks the length and begins a rip cut through bark fully down the log length while carefully stepping backwards. As he kills the saw, the rest of us dive in with “barking spuds” to begin stripping the log. The process is as surgical and deliberate as an Argentine Gaucho with a steak knife and produces its own unique sounds and aromas as the wet pungent bark is ripped from the log. The big sheet broke in half as we peeled it, so no panel would come from it. It was to be a recurring theme for the next couple of hours.

With 5 or 6 big trees on the ground with no success for panels, Kevin surveyed the grove and decided to drop a “two footer” laterally across a draw. For a little added drama, he first pre-notched and back-cut another tree across the hollow, stopping shy of cutting so deep that it would go on down. He crossed the draw and came uphill to his target tree. We tied a GoPro on the trunk for a drama shot.  He gave us a wink, cranked his Stihl and plunged the bar into the tree. With his right hand squeezing full throttle on the saw, he momentarily let go of the handle with his left and gently removed a salamander from the trunk inching toward an untimely encounter with the blade. Scott, our Pro-Photographer, shoots me a glance and says “Did you see what he just did?” Kevin stands, kills the saw and strolls away just at the trunk begins to tilt. Eddie hollers “Watch this. Two with one shot!” With an increasing roar, the big tree came down popping limbs and scuffed the side of the lower pre-cut tree. Without a pause it immediately cracked and followed with its own dramatic crash to the floor at a perpendicular downhill angle. O.K. Kevin, that was cool, but we need a panel. 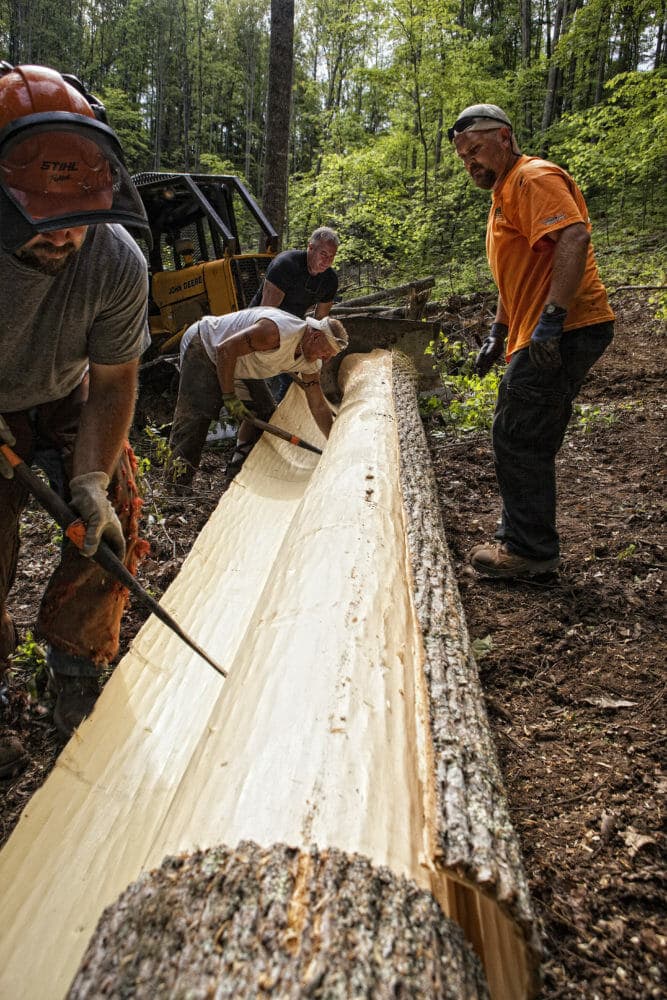 The big tree perfectly spanned the draw with the lower trunk remaining 2 or 3 feet off the ground. Perfect situation for a panel attempt as the bark is not pinned to the ground on one side. Kevin lays out the buck lengths with his log tape and I delight in seeing that we have 4 chances at 12’ panels. Buck cut, rip cut, and we’re ready to peel. Four of us start “spudding” the cylinder off one side.  Two remained to hold and cradle the sheet as to not let it fall. The other two of us switch sides and gingerly detach the remaining part still sticking. As careful as we are, the big sheet of bark makes a loud crunching belch and proceeds to break into two long sheets. The three remaining sections peel with the same result. A loud expletive, a short sigh, and that’s it for another attempt at filming a panel harvest. I purse my lips in disgust, still clutching a spud, as Keith grabs one of the sheets and drags it off downhill to be cut into shingles. Eddie attempts to console me by saying “Hell, you’da never gotter down that hill in one piece anyway.”

Our crew grabbed up the film gear and left Kevin to haul the shingles out with his. We all offered our observations at the skill and reverence that those guys bring to the forest. Always the gentlemen, always professional, and always with grace. It was a tough day on a tough site, and this re-enforced to us just how rare and elusive a poplar bark panel really is. 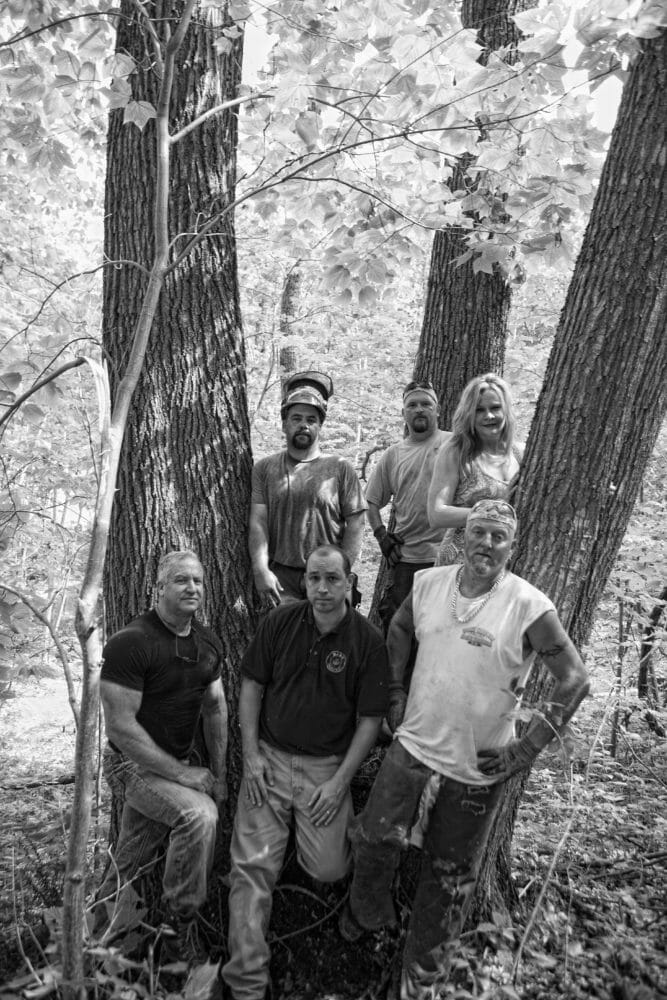 As our crew followed Kevin’s truck load of shingles onto our bark intake yard, we noticed a small stack of panels that had come in from another vendor while we were out. We all popped out of the truck to have a look. Big Travis, our yard manager, was looming over them with his clipboard as he barked out orders to our workers. As I smile at him at our change in fortune, his baritone voice booms out, “Where’s yourn?”

Special thanks to Scott Pearson (scottpearsonphoto.com) for the stills and Ryan for an incredible video.  As for Kevin, Eddie, and Keith…yes lunch is on me.